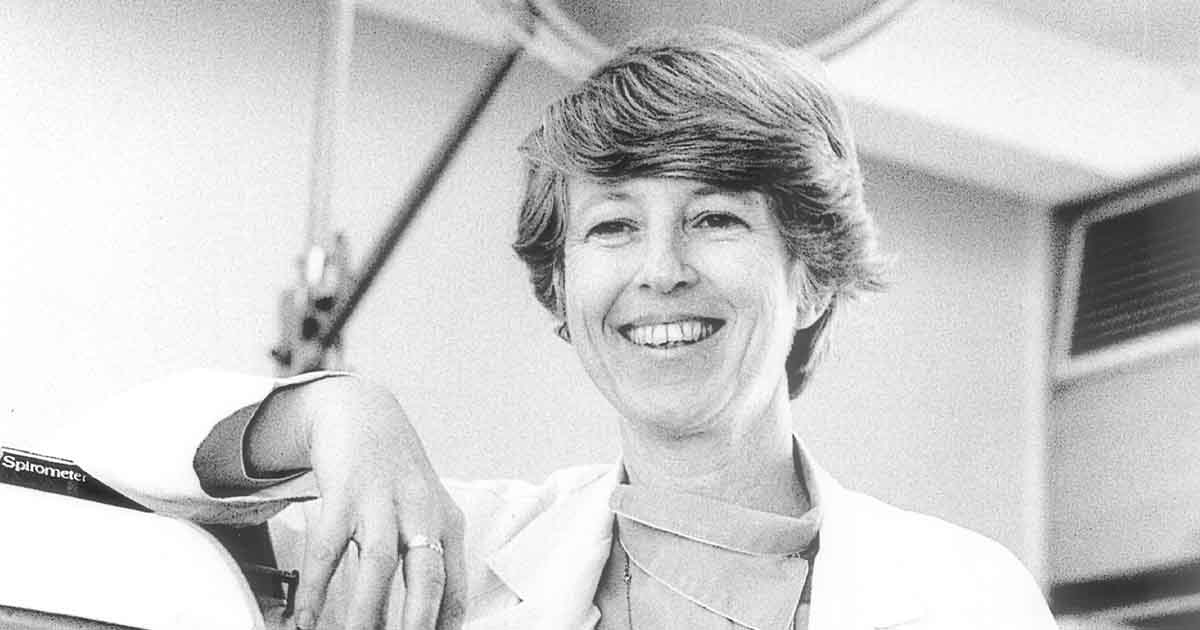 The Woolcock Institute of Medical Research is marking 40 years as a world-leading, award-winning specialist sleep and respiratory research centre. 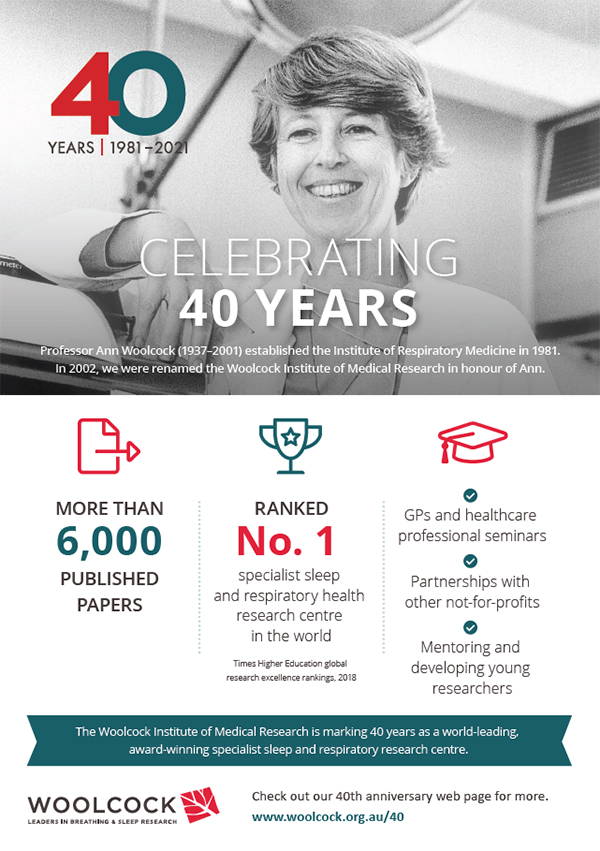 The Sydney-based institution was established by the late Professor Ann Woolcock in 1981 as Australia’s centre of excellence for respiratory research. Living up to her vision, the Woolcock has proven to be a trailblazer in the field of research and treatment of debilitating respiratory diseases like asthma, emphysema, chronic obstructive pulmonary disease (COPD) and lung cancer, as well as sleep conditions, including insomnia, sleep apnea and narcolepsy.

The Woolcock’s 200 researchers have published more than 6,000 academic papers on major scientific developments like life-saving TB treatment, new lung cancer biomarkers, and improved guidelines for asthma treatment. The centre invests in bench-to-bedside projects that make meaningful differences for patients, and has a proven track record for fostering the next generation of researchers.

The centre, ranked the world’s best in field in 2018 by influential data firm Times Higher Education, revelled in its new milestone. “It’s a proud moment to see four decades of world-class research behind us,” says executive director Professor Carol Armour. “We won’t stop there. Our passionate and dedicated team is constantly striving to improve the respiratory and sleep health of all Australians.”

“Our environment is so important for good lung health,” says group leader Professor Guy Marks. “We are faced with threats from air pollution, bushfires, climate change and, most recently, COVID-19. This is an exciting time to be an epidemiologist because we have so many opportunities for our research to lead to positive change in the world.”

The Sleep and Circadian Research Group has spent 20 years at the forefront of obstructive sleep apnea (OSA) research. Group Leader Professor Ron Grunstein was involved in the first trials of continuous positive airway pressure (CPAP), now known as the gold standard OSA treatment. Since then, the group has gone on to show CPAP can improve depression and quality of life, and successfully test the use of dental devices as a CPAP alternative for OSA. What’s more, researchers launched the Woolcock Clinic, Woolcock NeuroSleep Clinic, and the high-density EEG Facility for Sleep and Circadian Research, a state-of-the-art research facility to explore the impact of sleep disorders on cognition, brain ageing and neurodegeneration.

Woolcock Vietnam’s highly productive research team has secured more than $50 million in research funding for TB screening and prevention since its inception in 2010. The group conducted two major trials involving more than 100,000 people that increased TB detection by 2.5 times. This dramatically reduced disease prevalence and saved lives, resulting in new WHO screening guidelines for TB.

The Woolcock established the Respiratory Technology Group in 2012 to help translate the institute’s discoveries to the clinic in the form of drug formulation and device development. Since then it has set up a pharmaceutical company, Ab Initio Pharma, to rapidly translate bench-top discoveries to clinical trial products, and developed a Master’s level training program to build capacity in the MedTech workforce.

Over the decades, the Airway Physiology and Imaging Group has uncovered the physiological mechanisms behind airway hyperresponsiveness and impaired small airway function in asthma and COPD. The team also shaped technical guidelines for two tests of lung function which are increasingly used in respiratory clinics globally. “We were the first group internationally to establish a combination of cutting-edge measures of airway function with 3-dimensional imaging, in airways diseases,” group co-leader Professor Greg King says. “The findings from our research program have contributed a large bulk of the knowledge that underpins the use of such physiological measurements in research and clinical practice today.” The team has also pioneered the use of telemonitoring technology to monitor lung function in asthma and COPD in Australia, and sophisticated data analytics to predict future asthma or COPD attacks.

The Respiratory Cellular and Molecular Biology Group has been involved in several seminal discoveries, including a breakthrough observation that there is increased airway smooth muscle cell proliferation in asthma, which partially explains why there is more muscle in the airways of people with the condition. They also uncovered why bronchodilators don’t work well in people with asthma when they have a common cold, and discovered the importance of the respiratory virome, viruses which can be found in both healthy and diseased lungs.

The institute established the Woolcock Emphysema Centre, Australia's only research centre dedicated to the fight against COPD. Among major achievements, the team found that the anti-inflammatory protein tristetraprolin can reduce hallmark features of COPD and so, in future, researchers may be able to switch off damaging inflammation in this disease. The centre also ran a number of clinical trials using telemonitoring to improve at-home care for people suffering with COPD, and established a breathlessness clinic to help people in the community.

The Clinical Management Group has also had several breakthroughs, including creating gold standards for inhaler use in the management of asthma, COPD and allergic rhinitis, which are now embedded within disease management guidelines. Significantly, there is now a new treatment regimen to reduce the risk of mild asthma, that has been implemented in 35 countries, including Australia. “The high quality clinical, qualitative and epidemiological research by our group has led to major changes in Australian and international guidelines,” says asthma expert and chair of the GINA scientific committee, Professor Helen Reddel.

These researchers have also influenced the development of novel inhalers with digital technologies and e-connectivity, and formed a national network of pharmacists who are immersed in research and respiratory disease care in the community. This work demonstrates the potential of pharmacists to screen and manage people with sleep disorders, and reduce exacerabations and improve medication use in COPD and asthma patients.

The institute opened the Woolcock Centre for Lung Cancer Research in 2019, to establish more effective therapies and diagnostic tests for patients suffering from lung cancer. The centre and the associated Lung Cancer Research Network have developed biomarker testing for predicting patient response to cancer therapy, and identified new pathogenic gene variants for the most common type of hereditary cancer syndrome. “We want to see a future where lung cancer is no longer considered a stigma for patients,” says centre leader Professor Maija Kohonen-Corish.

The Woolcock is also passionate about education and scientific outreach, with its researchers involved in National Science Week activities, GP and specialist professional development events, and patient education days, often in partnership with Asthma Australia, Lung Foundation Australia as well as industry. Furthermore, the institute’s leadership team is focused on the mentoring and career development of its young researchers and PhD students. "Having had the opportunity to mentor and guide careers over many years, our team leaders appreciate what a privilege it is to share young people’s passion for research,” Professor Armour says.