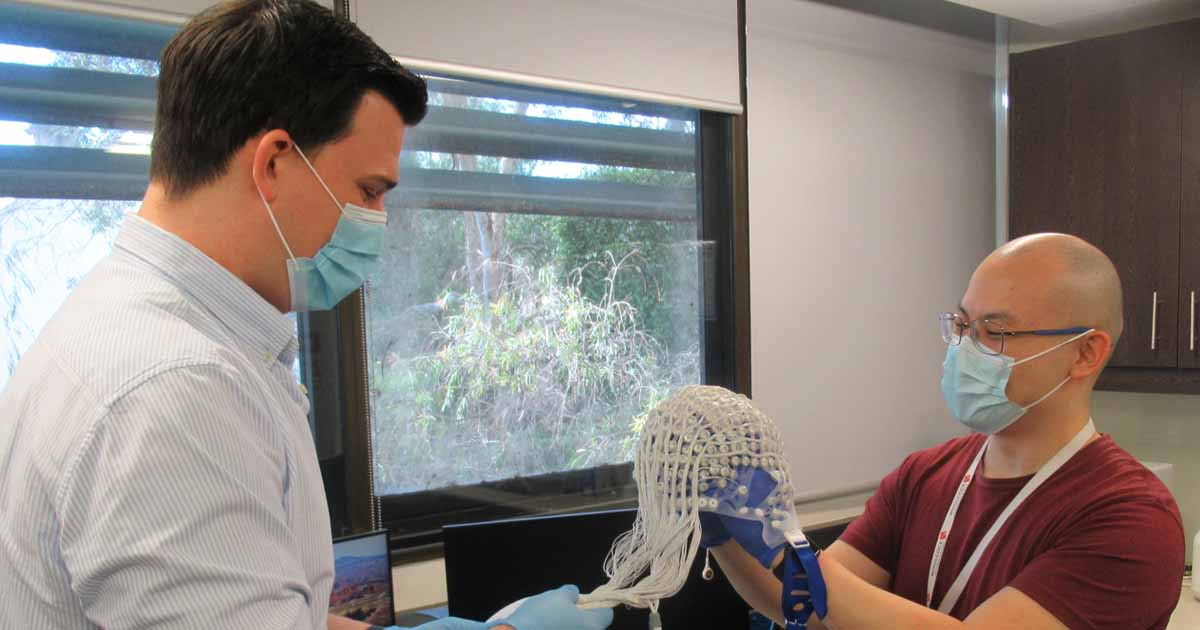 Researchers prepare a high density EEG cap for the study

Can a sleeping pill enhance sleep and improve memory in older people?

Our researchers have begun a pilot study to test the benefits of a widely-prescribed sedative, Zolpidem, on overnight memory consolidation in older people, whose memory may not be what it used to be.

If the pilot study is a success, the project will be extended to people with diagnosed mild cognitive impairment, the preclinical phase of Alzheimer’s Disease.

"Dementia is a major problem for Australia's ageing population. It would be very exciting if we show that this commonly available hypnotic can treat impaired memory, by optimising sleep," says co-principal investigator Dr Angela D'Rozario.

Zolpidem, which has a low risk of dependence and fewer side effects than other sleep drugs, has already been shown to boost memory and learning in young adults. Our team hopes to find the same with older people.

In the pilot study, up to 24 older people will visit the Woolcock Institute of Medical Research to undergo sleep studies. They will be randomised to receive either the sleep medication or placebo pill before bedtime on two separate occasions.

"Participants' brain activity will be monitored with a high-density EEG sensor net cap overnight. We'll then test them in the morning on a range of memory and learning tasks," says Dr D'Rozario, who is leading the investigation alongside Professor Ron Grunstein.

"We're hoping to find improved performance on memory and learning tasks after the medication night compared to the night where the placebo is taken."

"Ultimately we hope to show the drug can boost the density of sleep spindles, which are spikes of neural activity seen during sleep. If these spindles are visible, then we have a potential therapeutic target to slow or reverse cognitive deficits and improve health outcomes."

Research shows half of people with mild cognitive impairment go on to develop dementia within five years. Memory impairment is also commonly linked to disturbed sleep.

By optimising and targeting the protective characteristics of sleep on cognitive decline, this pilot study will provide our research group with valuable information about the underlying mechanisms and markers of the progressive nature of dementia.

There's still an opportunity to take part in this exciting study. You need to be aged 50 to 75 years, live in the greater Sydney area, and have noticed new memory issues that are not due to a pre-existing condition.

Your participation would take place over one month, including a screening visit and two overnight stays at the Woolcock Clinic in Glebe, Sydney. You cannot participate if you have mild cognitive impairment or suspected dementia, a history of stroke, a psychiatric disorder or are currently regularly taking sedatives.

If you're interested, register at the study page or email Richard Lim, richard.lim@sydney.edu.au.