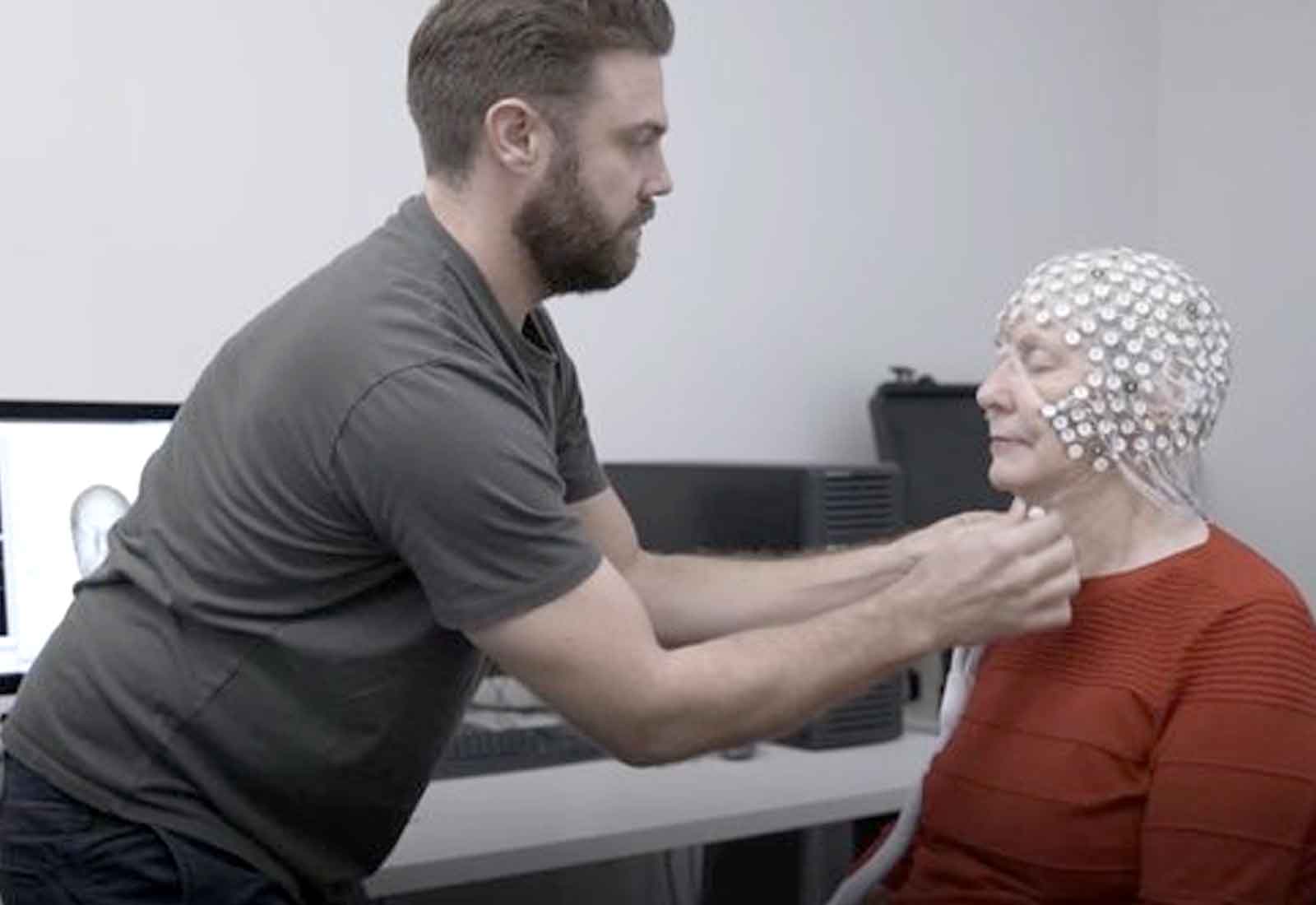 A high-tech cap has turned the world of sleep research on its head with the revelation that the brain sleeps whenever it wants, whether you want it to or not.

Sleep scientists at the Woolcock Institute of Medical Research are using high density electroencephalography (hdEEG) to show in detail what the brain really does while awake and asleep.

The powerful neurotechnology, which offers up a far more detailed and sophisticated look at the brain over time than ever before, is being unveiled at the Sydney Innovation and Research Symposium on Friday June 22, 2018.

The high tech, non-invasive sensor net is able to sample from 256 cortical sites compared to the standard six, allowing researchers to track every region of the brain simultaneously throughout the day or night.

Woolcock sleep researcher Dr Angela D'Rozario said the results seen so far are utterly fascinating. “Thanks to this little piece of smart technology we have a spotlight on neurons that shows us that when it comes to sleep, the brain has a mind of its own.”

The Woolcock is the only Australian sleep research organisation using the technology, with three studies currently underway at its Glebe headquarters in Sydney.

Using hdEEG, the cap samples from dozens of sites all over the scalp, giving an extremely detailed insight into brain activity. Previously the only way to get such a detailed look at the brain over time was to put a person in a brain scanner for hours, something few people are willing to do.

“Given that we were previously dealing with six to 10 sensors, what we have now is a quantum leap forward,” Dr D'Rozario said.

She said it was akin to the brain being an art gallery. “Imagine we’ve spent years peering through various keyholes into that gallery space, catching glimpses of various important works of art. Now, suddenly we find ourselves standing in the middle of that space, able to take in and observe all the works at once.”

Woolcock researchers are also using the sensor cap for the insight it can provide about the brain’s sleep/wake behaviour. Recent research has shown that wake-like activity can intrude into sleep, as in the case of people with insomnia who ‘feel’ as though they’ve spent the night awake.

“Studies indicate that these people are asleep but the parts of the brain responsible for sensory input are actually active,” Dr D’Rozario said. “No wonder they feel as though they haven’t slept a wink.”

Another study underway is looking at non-restorative sleep and the theory that parts of the brain are hyper-aroused while a person is asleep.

The cap has also shown that sleep can intrude into wakefulness in healthy sleep-deprived people. An upcoming Woolcock study will test out the theory that snoozing brain cells could be responsible for concentration lapses routinely suffered by people with the common sleep disorder, obstructive sleep apnea (OSA).

“We believe that in some particularly susceptible people with OSA, tightly-grouped populations of tired neurons are going ‘offline’ briefly, behaving as if they were ‘napping’ despite the person appearing fully awake,” Dr D’Rozario says.

A deeper understanding of brain behaviour could lead to exciting new therapies to control neurons and improve sleep in patients with insomnia and OSA, she says.

The sensor net also offers great promise in the ageing and dementia space. Researchers believe cognitive decline in older people could be linked to parts of the brain not “sleeping well”. Another study underway looks closely at the brains of people with early signs of dementia to see what it does during sleep. “We believe we can link these problem areas of the brain with specific brain and memory issues, and ultimately develop new treatments that can slow or even halt the cognitive decline,” Dr D’Rozario says.

Those interested in joining the Woolcock’s sensor net brain wave studies should contact the Woolcock Institute on 1300 303 935. Recruits must live in the greater Sydney area and will be compensated for time spent in the clinic.